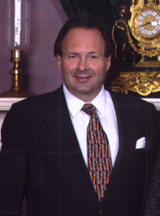 Bob has been active in numerous class actions involving defective products, environmental pollution and explosions. He has served as a member of the plaintiff’s steering committees in class actions against such companies as Dow Corning, Bristol Meyer Squibb, 3M, Kaiser Aluminum and Union Carbide.

Bob Caluda has been practicing law since 1978 exclusively in the South Louisiana area. He graduated from Loyola Law School in 1978 and University of New Orleans in 1974, St. Aloysius and Brother Martin High School in 1970 and St. Anthony Padua Grammar School in 1966.